Harriet
I am a Christian writer and speaker. I have authored or co-authored several books and my work has also appeared in numerous publications; magazines, anthologies,and devotionals including, Focus on the Family, The Upper Room, The Secret Place, David C Cook Company, Lifeway, Celebrate Life, Chicken Soup for the Soul, and many others. Visit my author page:https://www.amazon.com/-/e/B00MCID8DE and other blog at http://harrietemichael.blogspot.com 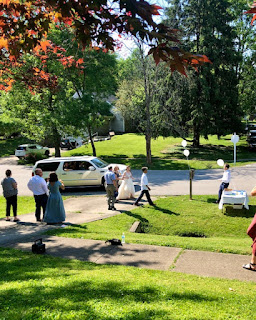 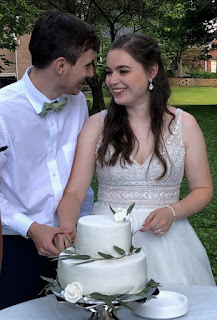 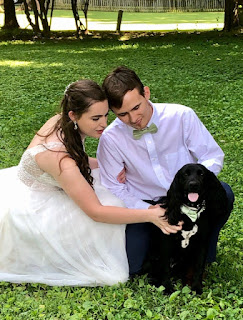 My youngest child, a 23 year old son married his high school sweetheart on June 13. She is so precious and we are so happy to have her become a Michael! Bless their hearts, things changed for them nearly every day.

Last fall when they got engaged, they started planing for a normal wedding--you know, the kind that has bridesmaids, groomsmen, and guests sitting in the audience. But then came the pandemic. They sort of put things on hold in February-March when everything in our city, state, and nation shut down and closed up. My son and many of his groomsmen had chosen to wear the same suits they had worn in another friend's wedding the year before. My son attended a Christian school from kindergarten to 12th grade and because of this, he has a close-knit group of friends. But of course, my son's groomsmen differed by a few from the friend who marred the previous year. I had just received my grandson's matching suit but the two college friends had not purchased their suits when the stores closed. No problem, since my son and bride-to-be were then told only 10 people could attend their wedding.

They canceled the reception and planned a drive-by where their friends could drive through the church parking lot to say hi to them. Then just two weeks before the wedding, the wedding planner decided to call the wedding a church service and as such got permission for 1/3 the building capacity, which came to 100 people who could now come as long as they maintained social distancing. Bridesmaids and groomsmen were back on! I had made the gesture of offering to provide the bow ties for all of them as my son's gift to them. Now suddenly, I found myself going to four different Kohl's locations buying one bow tie here and two there trying to match the one my son had already bought. Kohl's hadn't gotten a truck in since March and there was no time to order these. I drove about 30 minutes in one direction from my house and then 30 minutes again in the other to four different Kohl's that had whole sections boarded up from the protests and riots the night before, all the while wearing my mask.

The once canceled reception now was going to be a small family-only occasion in my backyard and we were scrambling to figure out the rehearsal dinner, which was back on too. In a flip of tradition, the bride's parents arranged the rehearsal dinner while I planned the reception.

It was a whirlwind with the winds changing every day, and surprises every minute, including when just about two hours before the wedding, two college friends discovered their suits were not the same color blue as all the other groomsmen. Remember that previous wedding? Well, the brilliant best man thought to call a couple of the guys who had been in that wedding but were not in my son's. He ran out and rounded up two more matching suits about one hour before the wedding started. In the end, though, it all turned out about as beautiful as if we had planned it all to go just the way it did--church wedding with attendants and guests, outdoor catered rehearsal dinner, small family-only outdoor reception and still a drive-by to greet the guests individually who'd had to keep their distance at the wedding ... and since the reception was in my backyard, Ty's beloved dog got to don a bow tie and show up for a picture too.

It was a beautiful time, a precious time, and certainly a wedding we will all remember!
Posted by Harriet at 12:55 PM 2 comments: